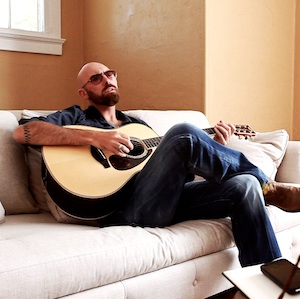 NASHVILLE, TN (November 5, 2013) – Corey Smith will debut the brand new music video for his infectious single “Ain’t Going Out Tonight” today (11/5). The first look online and on apps is slated across VEVO, the world’s leading all-premium music video and entertainment platform. Throughout the lively video, the rising singer-songwriter shows his playful side. Shot in Corey’s hometown of Jefferson, GA, the video for “Ain’t Going Out Tonight” features fun scenes of a young man imagining what could have happened if he decided to go out that night with his buddies but chooses to stay home with his lady instead. Director Hodges Usry reinforces the good-humored moments with cuts of Corey writing and performing the song. Find out more straight from the source! http://www.sweettalkpublicity.com/index.php/news/39-corey-smith/163-corey-smith-debuts-new-music-video-for-ain-t-going-out-tonight-first-look-online-slated-across-vevo-today-11-5

Corey Smith Ends A 10-Day Run At George’s. This past Saturday, May 4, Corey Smith played George’s Majestic Lounge in Fayetteville. It was the day after dead-day for the University of Arkansas and the last show of Smith’s 10-day run on the road. Of course the crowd wasn’t strictly Razorback co-eds, as George’s pulls fans from all over Northwest Arkansas, the River Valley, Oklahoma and Missouri. But no matter where people came from, they were all there to have a good time and enjoy Smith’s music. Andy Frasco opened the show and definitely had the crowd pumped and ready to go. Smith took the stage a little after 10:30pm and entertained with his hits “If I Could Do It Again,” “Twenty-One,” “Maybe Next Year,” “Drinkin’ Again,” “Party” and more! The best part of seeing one of Smith’s shows, in my opinion, is singing along and dancing with your friends (and usually some complete strangers, or “friends for the night” as I like to call them). Everyone suddenly has a kinship when yelling “and they wonder why folks don’t trust ’em no more.” Before the show, I had a little time to talk with Smith about his upcoming Grand Ole Opry debut. He will perform Saturday, May 18. “I’m excited, it’s a feather in my cap, a milestone,” Smith said. “It was always a dream of mine to play the Opry and my grandparents see it.” Y’all be sure to watch and see which two songs Smith will play with the Opry band in a few, short weeks!

Country Throwdown Adds Corey Smith To Line-up and Additional Dates! The much anticipated Country Throwdown Tour is just hours away from its kick-off on Friday, May 18th in Gulfport, MS, and it has just recently been announced that Corey Smith has been added to the already packed line-up! The tour will be stopping in 20 cities all over the nation, and previously announced performers include headliner Gary Allan, Justin Moore (select dates: 5/18-5/27), Rodney Atkins (select dates: 6/1-7/1), Josh Thompson, Sunny Sweeney, Eric Paslay, Maggie Rose, and Florida Georgia Line. Like Moore and Atkins, Corey will only be playing select dates as well including May 19, 20, 26 & 27! Who’s ready to throwdown?!

Corey Smith Releases Music Video For Maybe Next Year. Corey Smith’s newest single, “Maybe Next Year“, from his album The Broken Road, now has a video! It was filmed in Nashville and was directed and produced by David Poag through Team Genius. “Although I wrote “Maybe Next Year” in my late 20’s, I think it serves as a friendly reminder of the fact that we can all use a little self-improvement, no matter how old we are. I’m happy that fans will be getting to see the song come to life in such a vivid way. I hope they are as pleased with the video as I am.” -Smith In addition to the release of his new video, CMT.com will launch the “Maybe Next Year Sweepstakes” later this month. The contest will allow fans to send photos of themselves finishing the phrase, “Maybe Next Year…” for the chance to be the grand prize winner. The Grand Prize includes a private opera box to see Corey Smith live at the House Of Blues in Myrtle Beach, SC on December 31, 2011. The trip includes round-trip airfare for two, a one night hotel stay, transportation to and from the airport, a food and beverage allowance, goody bags from both the House of Blues and Corey Smith and a meet and greet with Smith backstage. Watch “Maybe Next Year” here! Tags: Maybe Next Year, Corey Smith, Corey Smith Videos

Corey Smith Had Fayetteville Rocking Till They Couldn’t Rock Anymore! This past Friday (November 4) Corey Smith was the headlining act at George’s Majestic Lounge in Fayetteville, Arkansas. The Average Joe’s artist was a hit as he sang to a sold out crowd! The fans didn’t miss a beat as they sang along, word for word to the outspoken musicians lyrics. “Backroad“, “If I Could Do It Again” and “Maybe Next Year” were just a few songs from his latest album The Broken Road that he belted that night. The opening act was a band by the name of Florida Georgia Line. These guys did an exceptional job of getting the crowd pumped up! I found myself saying over and over “Who are these guys?” They have some great original music and are full of energy! They will be making a few more stops with Smith as he travels down the road doing what he loves! You can find more about them at their website www.floridageorgialine.com The Broken Road Track Listing 1. Intro 2. If I Could Do It Again 3. Carolina 4. I Love Everyone 5. No Way (Out With A Smile) 6. Heart Attack 7. Hey Corey 8. Broken Record 9. Maybe Next Year 10. Backroad 11. Roots 12. New Day 13. Sugar Daddy 14. Twenty-One 15. Something To Lose 16. Down To Earth 17. Silly